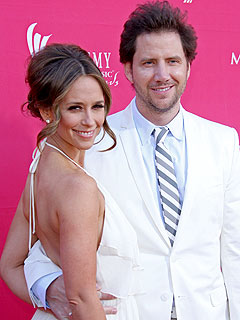 After a year-long romance, Jennifer Love Hewitt and Jamie Kennedy have broken up, a rep has confirmed exclusively to PEOPLE.

No further details were available.

Though some in the blogosphere called them an unlikely couple, Kennedy and Hewitt regularly gushed over each other.

When Kennedy first confirmed the romance in March 2009, he told Ryan Seacrest during a radio interview, “I’m in love!” Describing his costar on Ghost Whisperer, Kennedy said: “It’s like, ‘Wow, you are hot. You can sing, you can dance, you’re like, so smart and, wow, you can cook pasta fagioli, too.’ ”

Hewitt called her beau “hilarious,” but praised him as more than just a funnyman. “There are people in your life who are just supportive and who just look at you and they see who you are,” Hewitt told Ellen DeGeneres last year. “And [Jamie] really saw who I was as a person more than anybody had ever done in my whole life. I think that’s for me when I sort of went, ‘Oh, wow.’ ”